WINSTON-SALEM, N.C. and ATLANTA, July 16, 2019 /PRNewswire/ -- BB&T Corporation (NYSE: BBT) and SunTrust Banks, Inc. (NYSE: STI) today announced a Truist Bank Community Benefits Plan under which the combined company will lend or invest $60 billion to low- and moderate-income (LMI) borrowers and in LMI communities over a three-year period from 2020 to 2022. The plan is a concrete example of the commitment of Truist Financial Corporation, the combined company to be created through their proposed merger of equals, and reflects BB&T's and SunTrust's continued commitment to supporting investment in their communities after the expected completion of the merger this fall. 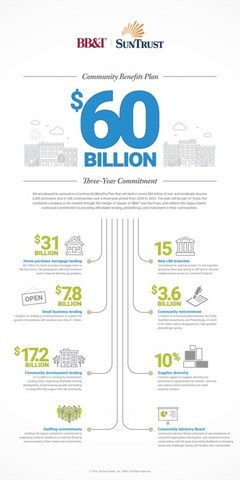 Additionally, Truist plans to further the legacy institutions' commitment to underserved neighborhoods by seeking to open at least 15 new branches in LMI and/or majority minority communities across its future footprint.

The Community Benefits Plan is a direct result of input received in listening sessions that BB&T and SunTrust hosted in metro and rural communities around the combined institutions' forecasted geographies, as well as comments shared during public meetings regarding the proposed merger.

"The Community Benefits Plan exemplifies what Truist will stand for and how it will support local communities in the years to come," said BB&T Chairman and Chief Executive Officer Kelly S. King. "Both BB&T and SunTrust have long legacies of serving the community, but together as Truist, we will be uniquely positioned to invest in ways we never could on our own. We have great partners with the National Community Reinvestment Coalition (NCRC), which helps our commitment for growing diverse and vibrant neighborhoods in the regions where we work and live."

"Truist is creating the premier financial institution to serve the diverse needs of our clients and communities, and this plan is an initial stake in the ground as to our values and commitments. Our legacy companies share a strong history of being more than members of the communities we serve, but also partners in developing affordable housing, promoting financial literacy, and providing access to critical programs and services. Today's announcement is a reflection of that history and a look ahead at what we can collectively achieve as one combined institution," said SunTrust Chairman and Chief Executive Officer William H. Rogers, Jr.

The plan was drafted in cooperation with the NCRC, an association of more than 600 community-based organizations that promote access to essential banking services, affordable housing, entrepreneurship, job creation and vibrant communities for America's working families.

"Many bank mergers proceed without any detail on how communities will benefit from the combination," said NCRC CEO Jesse Van Tol. "However, BB&T and SunTrust showed tremendous leadership by participating in a collaborative process with NCRC and our community-based member organizations to establish the largest-to-date community benefits plan. This plan spells out a substantive and detailed commitment of loans, investments and services to low- and moderate-income people and neighborhoods across 17 states and the District of Columbia."

"This plan will provide a much-needed influx of investment into critical programs that improve affordable housing, mortgage lending, small business development and economic development projects to low- and moderate-income people and communities across most of the eastern half of the country," said NCRC President and Founder John Taylor. "We very much appreciate the strong collaboration demonstrated by the executive leadership of BB&T and SunTrust, as well as the critical role our members played in our discussions with the banks."

Truist will also continue the legacy institutions' commitment to employing a diverse workforce to meet the financial services needs of their clients and communities. This is in addition to Truist's continued support of supplier diversity and promotion of opportunities for women-, minority-, and veteran-owned businesses and small business vendors.

Truist will work with a Community Advisory Board composed of representatives of nonprofit organizations serving low- and moderate-income communities, with the goal of providing information and updates on the progress of the plan and obtaining input and feedback on emerging issues and challenges facing LMI families and communities.

In February 2019, BB&T and SunTrust announced a proposed merger of equals, which would result in the sixth-largest U.S. commercial bank based on assets and deposits. The merger is expected to close in the third or fourth quarter of 2019, subject to customary closing conditions, including regulatory approvals and approval of both companies' shareholders.

About BB&T
BB&T is one of the largest financial services holding companies in the U.S. with $227.7 billion in assets and market capitalization of approximately $35.6 billion, as of March 31, 2019. Building on a long tradition of excellence in community banking, BB&T offers a wide range of financial services including retail and commercial banking, investments, insurance, wealth management, asset management, mortgage, corporate banking, capital markets and specialized lending. Based in Winston-Salem, N.C., the company operates more than 1,800 financial centers in 15 states and Washington, D.C., and is consistently recognized for outstanding client service by Greenwich Associates for small business and middle market banking. More information about BB&T and its full line of products and services is available at BBT.com.

Cautionary Note Regarding Forward-Looking Statements
This communication contains "forward-looking statements" within the meaning of the Private Securities Litigation Reform Act of 1995 regarding the financial condition, results of operations, business plans and the future performance of BB&T and SunTrust. Words such as "anticipates," "believes," "estimates," "expects," "forecasts," "intends," "plans," "projects," "could," "may," "should," "will" or other similar words and expressions are intended to identify these forward-looking statements. These forward-looking statements are based on BB&T's and SunTrust's current expectations and assumptions regarding BB&T's and SunTrust's businesses, the economy, and other future conditions. Because forward-looking statements relate to future results and occurrences, they are subject to inherent uncertainties, risks, and changes in circumstances that are difficult to predict. Many possible events or factors could affect BB&T's or SunTrust's future financial results and performance and could cause actual results or performance to differ materially from anticipated results or performance. Such risks and uncertainties include, among others: the occurrence of any event, change or other circumstances that could give rise to the right of one or both of the parties to terminate the definitive merger agreement between BB&T and SunTrust, the outcome of any legal proceedings that may be instituted against BB&T or SunTrust, delays in completing the transaction, the failure to obtain necessary regulatory approvals (and the risk that such approvals may result in the imposition of conditions that could adversely affect the combined company or the expected benefits of the transaction) and shareholder approvals or to satisfy any of the other conditions to the transaction on a timely basis or at all, the possibility that the anticipated benefits of the transaction are not realized when expected or at all, including as a result of the impact of, or problems arising from, the integration of the two companies or as a result of the strength of the economy and competitive factors in the areas where BB&T and SunTrust do business, the possibility that the transaction may be more expensive to complete than anticipated, including as a result of unexpected factors or events, diversion of management's attention from ongoing business operations and opportunities, potential adverse reactions or changes to business or employee relationships, including those resulting from the announcement or completion of the transaction, the ability to complete the transaction and integration of BB&T and SunTrust successfully, and the dilution caused by BB&T's issuance of additional shares of its capital stock in connection with the transaction. Except to the extent required by applicable law or regulation, each of BB&T and SunTrust disclaims any obligation to update such factors or to publicly announce the results of any revisions to any of the forward-looking statements included herein to reflect future events or developments. Further information regarding BB&T, SunTrust and factors which could affect the forward-looking statements contained herein can be found in BB&T's Annual Report on Form 10-K for the fiscal year ended December 31, 2018, as updated by its Quarterly Reports on Form 10-Q, and its other filings with the Securities and Exchange Commission ("SEC"), and in SunTrust's Annual Report on Form 10-K for the fiscal year ended December 31, 2018 , as updated by its Quarterly Reports on Form 10-Q, and its other filings with the SEC.

INVESTORS AND SECURITY HOLDERS ARE URGED TO READ THE REGISTRATION STATEMENT ON FORM S-4, THE JOINT PROXY STATEMENT/PROSPECTUS INCLUDED WITHIN THE REGISTRATION STATEMENT ON FORM S-4 AND ANY OTHER RELEVANT DOCUMENTS FILED OR TO BE FILED WITH THE SEC IN CONNECTION WITH THE PROPOSED TRANSACTION BECAUSE THESE DOCUMENTS DO AND WILL CONTAIN IMPORTANT INFORMATION ABOUT BB&T, SUNTRUST, AND THE PROPOSED TRANSACTION.